Katherina Radeva is a Bulgarian born award winning set and costume designer based in Scotland whose work tours across the globe.

Katherina designs environment, set and costume for theatre, dance, performance and everything in between. A Wimbledon School of Art graduate Katherina was a Linbury Prize for Stage Design finalist in 2005. Since then she has worked on numerous small, big, touring, rep, outdoor and site-specific exciting and spectacular projects. Her designs tour around the world and has won awards.

Credits include: the multi award winning salt. by Selina Thompson, Class by Scotee, with bread by Leo Burin, Chasm by Sophie Unwin, Everything We’ve Always Wanted to Tell You by Scotee, Forge by Rachel Mars,Whirlygig by Daniel Padden, Leaving by Curious Monkey, The Missy Elliot Project by Selina Thompson, Stick By Me by Andy Manley, Brothers Karamazov at Tron Theatre, Then Leap by Laura Lindow, Thesmo by Natalie Diddams, Moonfleece and Discontented Winter for Salisbury Playhouse, Falling in Love with Frida by Caroline Bowditch, The Sphinx and The Books for Lorena Rivero de Beer, Epic for Foster & Dechery, Lay Me Down Safe for Scottish Dance Theatre, Elephant 21 at Royal Court Theatre Local for Mayhem Company; Ill Met by Moonlight for Moon Fool The Glass Mountain for Trestle Theatre,  Hungry Ghosts for Lost Dog Dance Theatre, Veil for Horse and Bamboo Theatre amongst others.

Katherina co-runs Two Destination Language an award winning performance company which celebrates difference and makes work for stages which tours extensively in the UK and internationally, imagines and runs projects with communities and curates festivals and projects with artists at the heart recognising the artist as catalyst for change.

Katherina is also a visual artist whose work has appeared at critically acclaimed solo shows in Scotland as well as numerous group exhibitions in the UK, Europe and the USA 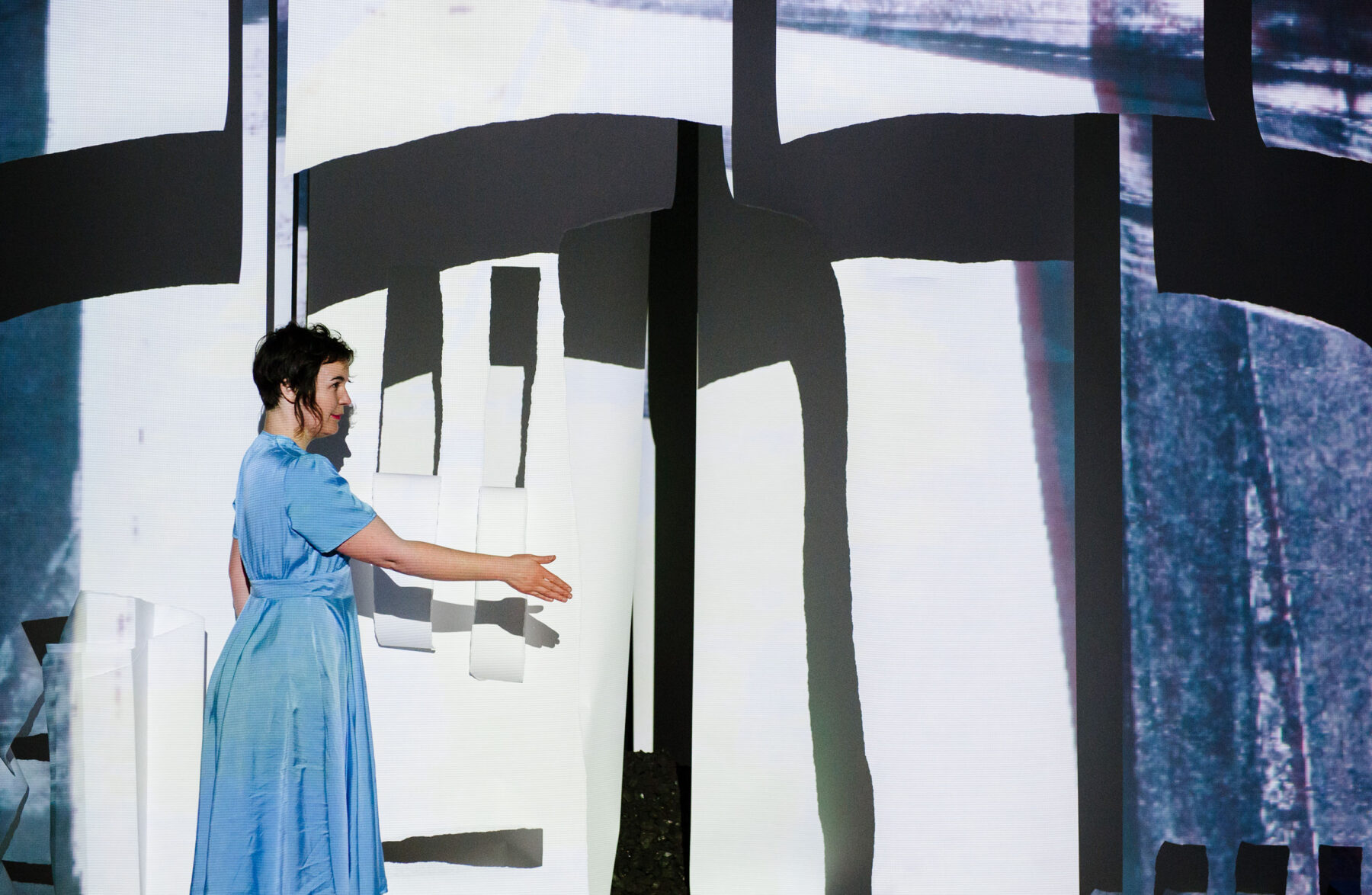 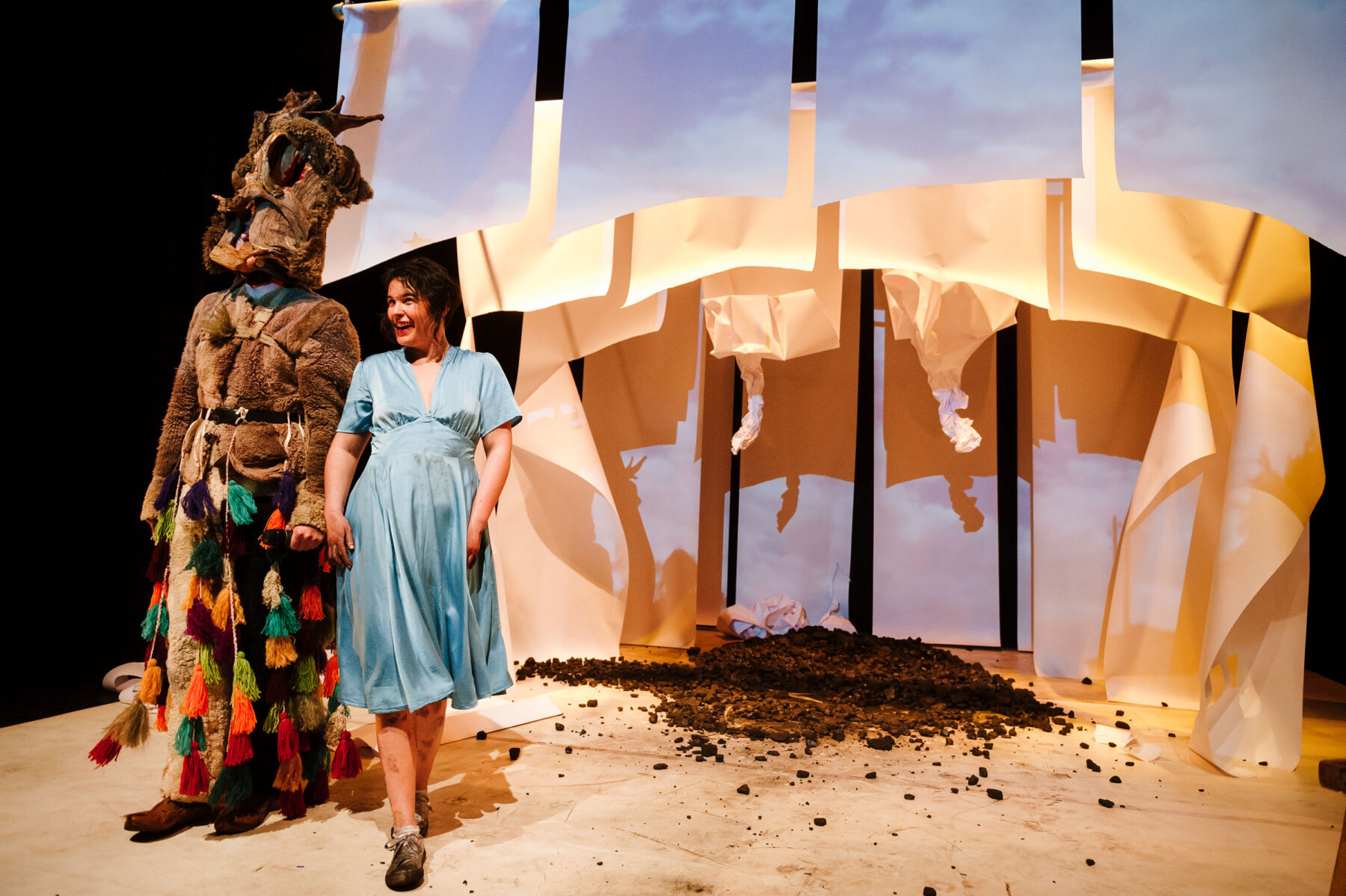 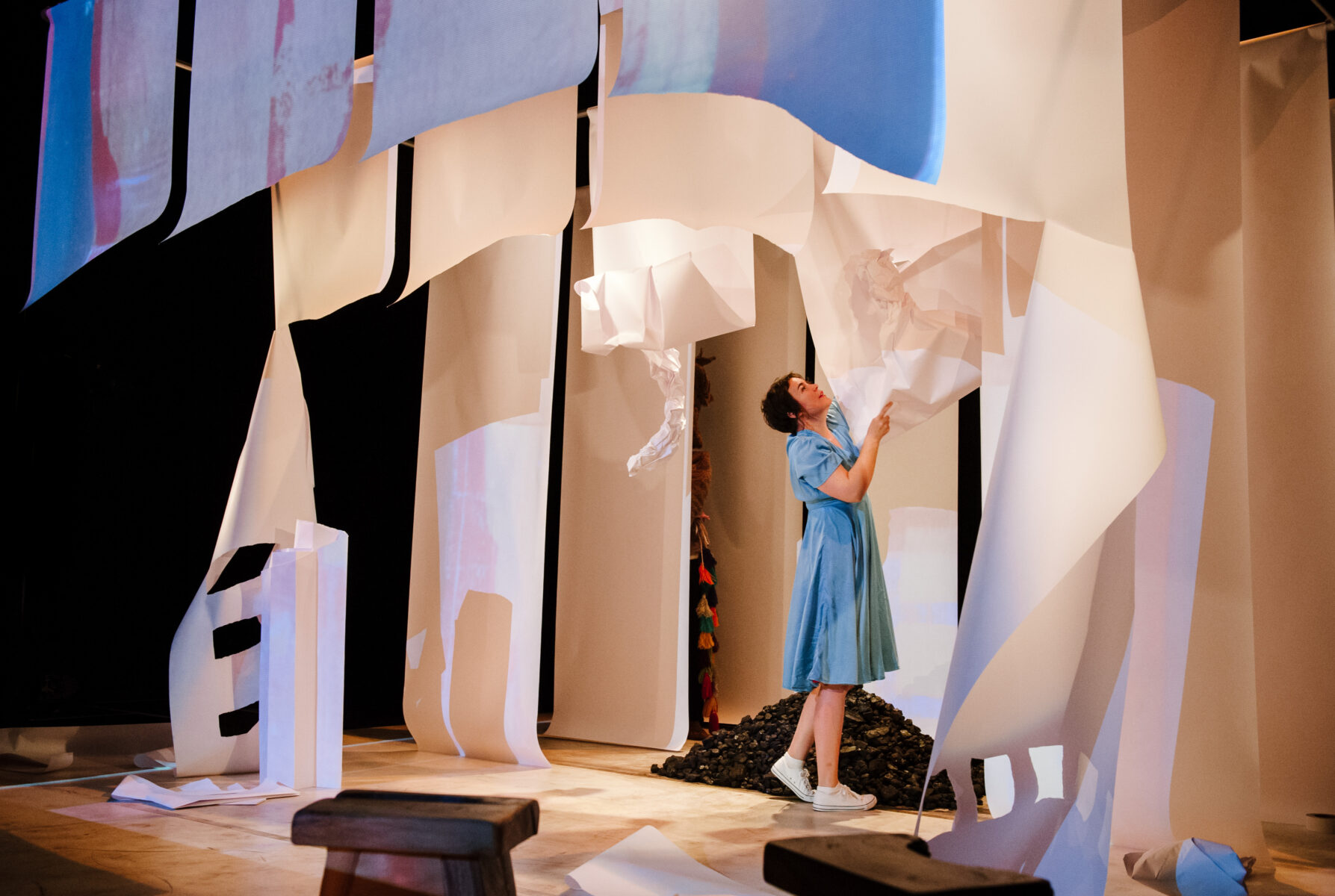 Declining Solo is about how we deal with the overwhelm of memory, and about the slow loss of a loved one.

So I was really keen in the design for this show to use the depth of the stage as a metaphor for going deeper into memory within the narrative. A bit like a onion, to slowly unveil and sculpt those memories, and for them to have a physical presence and not just a spoken/ imagined presence. The design also had to incorporate a lot of video, so whatever might be sculpted, it had to be done in a way where the projection would also work on the 3D shape it was hitting. Also, the design involved real coal on stage which the performer used to invoke the fragmentation and the messiness of memory. Each chunk of coal with its dust and dirt carefully forming a complex picture of uncontrollable residues spreading.

“MY PRACTICE IS FOREVER EVOLVING. THE PROJECTS I CREATE AND WORK ON ARE ALWAYS WITH CONTEMPORARY ISSUES AT THEIR HEART. THEY TAKE PLACES ON STAGES, IN CAR PARKS, IN PARKS, IN SHOPPING MALLS, IN BIG SPACES, IN SMALL SPACES; IN THAT SENSE PLACE-MAKING IS A PART OF IT. I DON’T OFTEN LEAVE PERMANENT OBJECTS IN THE BUILT ENVIRONMENT, BUT WORKING TO MELD TRADITION WITH CONTEMPORARY ARTISTIC AND POLITICAL IDEAS IS PART OF MY PRACTICE IN BOTH COMMUNITY PROJECTS AND STAGE SHOWS.”